Prior to establishing 'Mozart has the blues' in 1991, I - my name is Wolfgang Billmann - had played on countless sessions, in addition to my regular bands. For example, I drummed on a jazz session, where a classical female vocalist sang with a tight vibrato in the smoky jazz piece "Blue Monk", or on a rock session, where a heavy metal guitarist and a piano student rocked Mozart's arias. I see 'Mozart has the blues' and myself as an amateur to semi-professional. And by this, I don't mean the musical standard, but rather as Mr. Ziegenruecker expressed it (1): "An amateur musician ..." is someone, "... who plays with joy and enthusiasm, ...but not as a main profession...," and further, that "many innovations up to stylistic inventions" come from amateur musicians. I still experiment with stylistic innovations, just as I am now doing with 'Mozart has the blues'. This band first took shape, when, from 1991 on, I subsumed the ever-changing session groups, that had continuously existed in addition to my main music groups, under the name 'Mozart has the blues'. In 1994 a relatively stable trio emerged from this and then a duo, after the guitarist ran away due to the band's experimental sound. In 1997, on my fiftieth birthday, I decided to restrict myself to my own bands such as 'Mozart has the blues'. 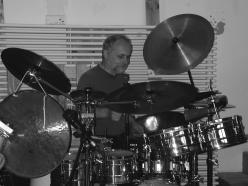